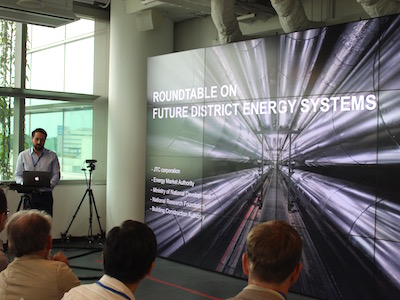 The adoption of district energy systems in countries with access to heat sinks could reduce energy consumption for cooling buildings by 50 to 80 per cent, according to experts at the first Roundtable on Future District Energy Systems in Singapore organised by the Future Cities Laboratory.

New technologies such as super-desiccants and refrigerant-based district networks could highly contribute to this goal, according to distinguished speakers at the first Roundtable on Future District Energy Systems in Singapore. They include National University of Singapore (NUS) Professor Ernest Chua – two-time winner of the Engineering Award and the R&D Award by Singapore’s Ministry of National Development – and EPFL Professor Francois Marechal.

50% of the Total Energy Demand is in Buildings

The major barriers to the integration of these technologies, they said, are higher upfront costs and building regulation. Another conclusion at the roundtable is that the residential sector of Singapore represents an unexplored market for district energy which today represents close to 50 percent of the total energy demand in buildings.

In a topical and highly dense city such as Singapore, district energy systems are not only a highly relevant, but also a highly viable solution to the city’s cooling needs while ensuring energy efficiency and reduction of emissions. However, future district energy systems in Singapore will require new business models and regulation to allow the access to cutting-edge technology in both commercial and residential sectors.

Based in Singapore, FCL researchers led by ETH Zurich professor Arno Schlueter and EPFL professor Francois Marechal will not only tackle technological, commercial and regulatory issues, but also address human comfort and the interactions of energy systems with urban design.