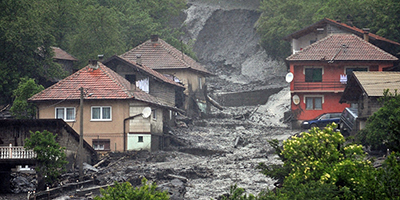 A view of a landslide and floodwaters around houses in the village of Topcic Polje, near the central Bosnian town of Zenica, on May 15, 2014. Severe flooding in Serbia and Bosnia has forced schools to close and hundreds of people to evacuate their homes and left thousands more without power. In Bosnia, hundreds of homes were cut off or flooded after the Miljacka river, which runs through Sarajevo, broke its banks. Some 3,500 homes in the capital were left without power. Authorities said emergency workers were supplying food and medicines to those who could not leave their homes. AFP PHOTO / ELVIS BARUKCIC (Photo credit should read ELVIS BARUKCIC/AFP/Getty Images)