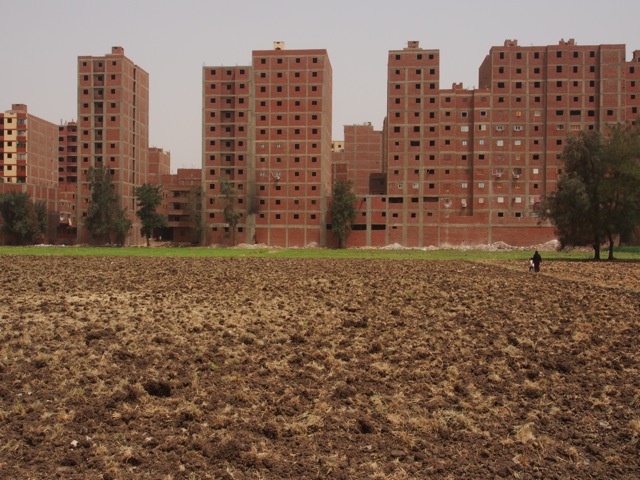 Sitting under a tree on a pile of discarded furniture, surrounded by fifteen-story buildings, the sad-eyed farmer and his wife tell a gloomy story, that of disappearing agriculture at the periphery of Cairo. Surrounded on three sides by blind brick facades, their field is about 100 meters long and 15 meters wide, planted with clover. They have been working this land for over fifty years, but their sons don’t want to farm after them. The farmer does not own the land, and knows that it is only a matter of time until the soaring real estate values in the area will convince the landowner to sell and force them out.

He has no hope. His field stands in the shade of the neighboring buildings and is sprinkled with trash from the streets. He used to grow vegetables for human consumption here – wheat, eggplants, and tomatoes. But as the city grew, quality declined, and neighborhood kids stole the harvest anyway. Cultivating animal feed like clover is the only viable option now. The main reason the farmer is still able to cultivate this urban plot is that there is a well on the property and he can irrigate easily. Across the street, there is an unfinished, 14-story-high concrete-and-brick construction. The owner told us that the plot used to be farmed, but the tenants were evicted when he bought the land. This farmer pair at the periphery of Cairo is only one paradigmatic case among thousands, casualties of the quickened pace of illegal construction on fertile areas at the Egyptian capital’s fringes and in the Nile Delta since the 2011 revolution. At present, 83 percent of Cairo’s informal settlements stand on former fertile areas. Here, the adverse effect of spatial changes brought about by rapid urbanization on land previously available for food production emerges as the territorially manifest intersection of competing urban and agricultural space, a global ongoing phenomenon.

In her ongoing doctoral research, Charlotte Malterre-Barthes investigates the relationships between food systems and the built environment through the lens of political economy, focusing on the case of Egypt. It is based on the belief that food systems and the factors that influence them at social, economical, and political levels affect architecture, urban form, and territorial organization. To test this premise, the project focuses on Egypt as a paradigmatic case to examine how the food system transforms and is transformed by territory. Aspects of territorial change, which the research addresses, comprise a series of interrelated issues that serve as examples of acute conditions of spatial transformation. Specifically, three scales of urban and rural transformations related to sub-structures of food supply in Egypt within the last few decades are examined: state-run bakeries in a neighborhood of central Alexandria, informal urban development on agricultural plots in Greater Cairo and the large-scale infrastructure project «Toshka» in Upper Egypt.

Charlotte Malterre-Barthes is scientific assistant at the chair of Marc Angélil and Director of Studies of the MAS Urban Design.