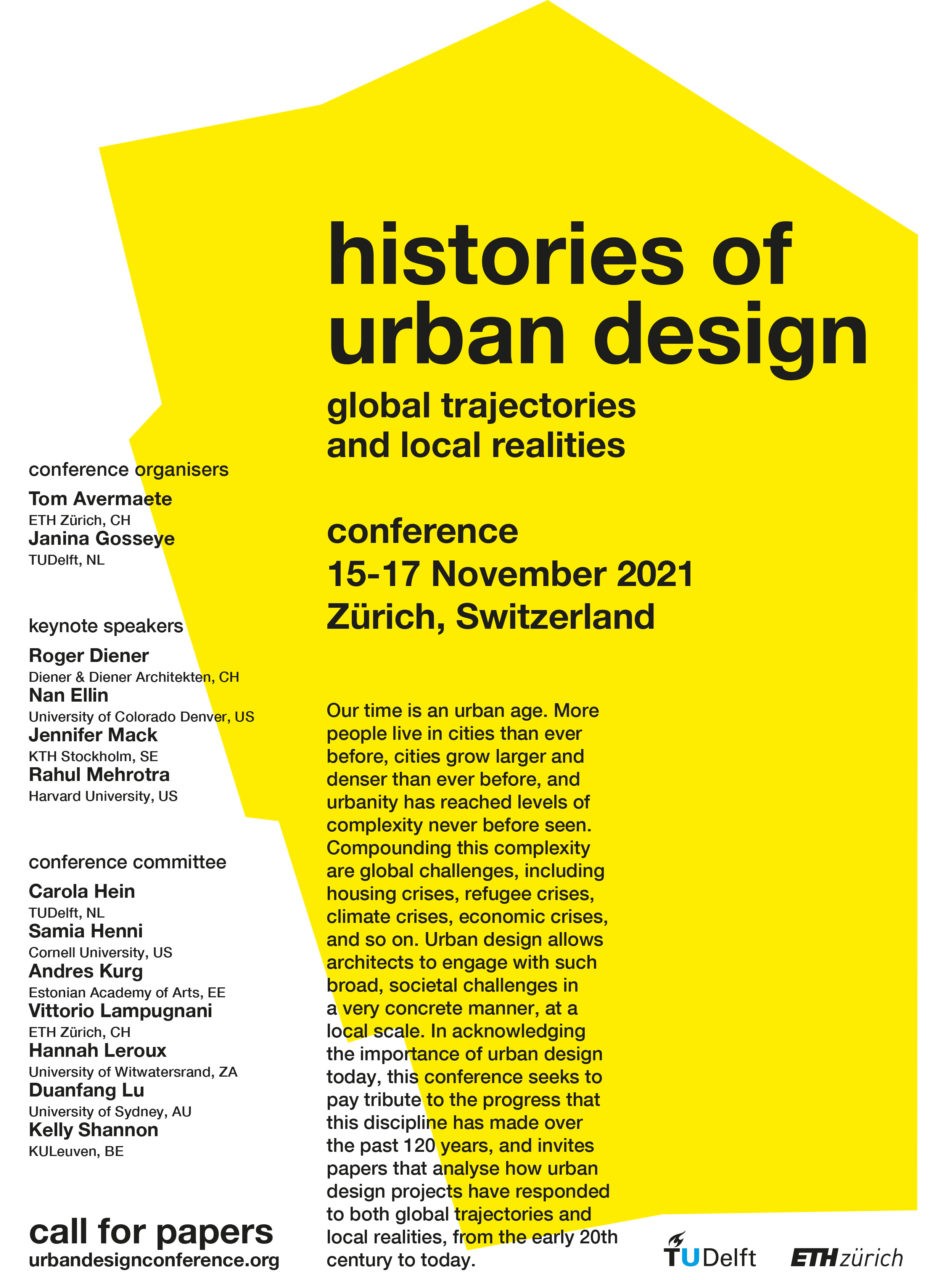 2021 will mark the 65th anniversary of the first conference on urban design, held at Harvard’s Graduate School of Design in 1956. Today, more than six decades later, urban design, as a discipline and practice, remains as relevant as ever – perhaps even more relevant than ever before. It is widely acknowledged that our time is an urban age. More people live in cities than ever before, cities grow larger and denser than ever before, and urbanity has reached levels of complexity never before seen. Compounding this complexity are global challenges, including housing crises, refugee crises, climate crises, economic crises, geopolitical crises, and so on.

The old adage ‘think global act local’, an idea which has been attributed to Scottish town planner and social activist Patrick Geddes, thus remains as relevant as ever. Urban design allows architects to engage with broad, societal challenges in a very concrete manner, at a (local) scale that supersedes the individual plot but avoids the full complement of urban complexity. In 1956, José Luis Sert described it as an ‘urban-minded’ practice that was ‘the joint work of the Architect, the Landscape Architect, and the City Planner’.

In acknowledging the importance of urban design today, this conference seeks to pay tribute to the progress that this discipline has made, from the early 20th century – so, even before the 1956 Harvard urban design conference was held – to today. Over the past 120 years, as urban populations steadily increased, urban-minded architects have devised innovative solutions to global challenges at a local level. This conference invites papers that focus on urban design projects that were realised between the early 1900s and today, and that analyse the interplay between specific building programmes and societal challenges on the one hand, and (novel) forms and practices within the discipline on the other – thus weaving threads between the heteronomy and autonomy of urban design.

Programmes and Challenges: The heteronomy of urban design

Housing and public space are perennial building programmes with which urban designers have had to deal across time and space. However, from the early 20th century also new building programmes emerged, such as mass education, mass leisure, shopping, offices, mass travel, etc. While giving shape to these existing and emerging building programmes, urban designers also had to negotiate societal challenges, including geopolitical tensions, the need for reconstruction after two world wars, growing secularisation, emerging climatic concerns, economic crises, natural disasters, pandemics, etc. Such societal challenges have propelled the development of the discipline of urban design over the past 120 years.

Forms and Practices: The autonomy of urban design

Apart from responding to external factors – the need to accommodate particular programmes while tackling broader societal challenges – urban design also develops according to its own internal logics; what one might call the ‘autonomy’ of the discipline. The continual reinvention of the urban grid, from Le Corbusier’s post-war project for Chandigarh to Bernard Tschumi’s Parc de La Villette for 1980s Paris, are good examples. While architects rediscovered and reinterpreted spatial forms, also the practice of urban design changed. From the early 20th century to today, the discipline of urban design has witnessed a growing professionalisation, which has forced an evolution of its codes and conventions and also altered the very nature of its professional practice.

We invite papers that analyse urban design projects that were designed and/or realised from the early 20th century to today. Papers should weave threads between programmes, challenges, forms and practices, and thereby connect the heteronomy of urban design to its autonomy. Case-studies that have not yet been examined in great detail and case-studies that originate in lesser studied geographies are particularly welcome. With this conference, we seek to collect a varied range of micro-histories that demonstrate how urban design projects have responded to global trajectories and local realities, from the early 20th century to today.