Mountain forests provide a wide range of ecosystem services, including carbon sequestration and protection from natural hazards. Forest cover in the European Alps has increased over the last century, but in recent years, these forests have experienced an increasing rate of natural disturbances by agents such as windthrow, bark beetle outbreaks, and forest fires.

These disturbances pose a challenge for forest management, making it important to understand how site and stand characteristics, land use legacies and recent management influence disturbance probability. We combined a dataset of forest disturbances detected from space with in-situ forest management records, allowing us to differentiate between different types of disturbances for the Canton of Graubünden, Switzerland, in the years 2005–2018. The resulting dataset of over 28′000 attributed disturbance patches (corresponding to a disturbed forest area of ca. 23′600 ha) was combined with information on topography, forest structure, and historical forest cover. A machine-learning approach was used to investigate the non-linear and interacting relationships between potential drivers and disturbance occurrence. Natural disturbances (especially windthrow and bark beetle outbreaks) were most common at lower elevations, on shallow and south-facing slopes, and in even-aged, spruce-dominated stands with a closed canopy. Forests established in the 20th century were significantly more susceptible to natural disturbances than forests that were already present before 1880, which may be due to the uniform age and vertical structure of secondary forests, as well as legacy effects of former agricultural use. On the other hand, forest management more often took place in forests present before 1880. Management interventions (such as thinning) in turn increased the susceptibility to natural disturbances in the short term. This finding emphasizes the need to balance short-term increases in disturbance susceptibility with long-term benefits in forest resilience when planning management interventions in mountain forests. Our findings highlight the importance of considering multiple interactive drivers, including management and land-use history, for understanding forest disturbance regimes. 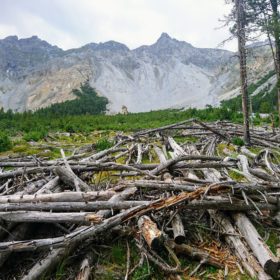