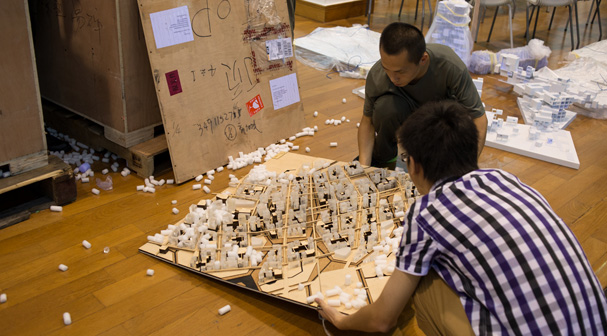 Vertical Cities Asia is an annual architecture and urban design competition aimed at developing new urban models for rapidly growing cities in Asia. The competition uses high density as a tool to address the challenges of growing cities and to counter the perpetual multiplication of destructive typologies. Each year participants are responsible for designing a one square kilometer territory. «Everyone Harvests» is the theme of the third annual Vertical Cities Asia design competition, which is sited in Hanoi, Vietnam and focuses on food and the city.

Hanoi is a highly dense urban area within a region of highly dense agriculture. As the city continues to grow, the competition between these two conflicting roles intensifies and serves as the driver of the competition theme, «Everyone Harvests.» This theme addresses the complex relationship between food and the city – its production, consumption, storage, and distribution. The term also alludes to the harvesting, storage, and distribution of resources for alternative energy solutions. Given the political and economic framework of the peri-urban agricultural lands of Hanoi, which give farmers long-term leases on government-owned lands, the state of these areas is increasingly unstable. As the city continues to grow, this land is used to accommodate new development, which is destructive to both the land and the farmers who cultivate it. High density, integrated infrastructure, and an expanded definition of sustainability can be used as tools to accommodate the needs of new development as well as those of agriculture.

Redefine sustainability to include social and economic imperatives?

New, high-density urban models that address the challenges facing the peri-urban condition can provide self-reliance, resilience, and flexibility necessary in these areas. Most conventional urban models see this land as an either/or condition – agriculture or development. It is imperative to integrate these conditions, to build integrated infrastructure that can accommodate the unique conditions where the urban meets the rural. In this way we can create new prototypes for alternative futures.

The Vertical Cities Asia design competition is organized by the National University of Singapore (NUS) School of Design and Environment (SDE) and is sponsored by the World Future Foundation (WFF) and Beijing Vantone Citylogic Investment Corporation. It was launched in January 2011, and since then has been held as a joint special urban design studio at the ETH Zürich between the Chairs of Prof. Brillembourg & Klumpner with Michael Contento and Prof. Christiaanse with Myriam Perret.