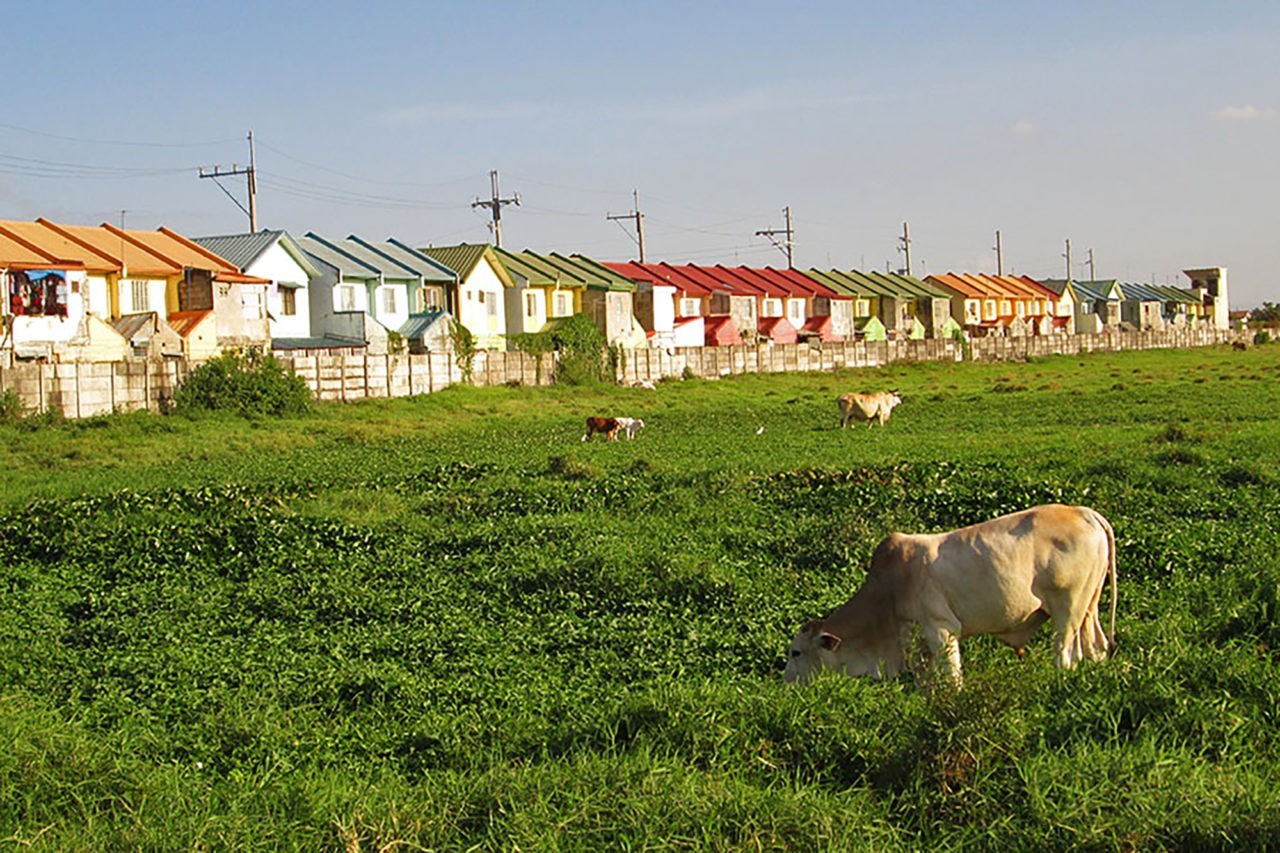 A cow peacefully grazes on an open field, a real estate development site with a row of houses and electrical poles in the background. Such landscapes are commonly seen around the world – and it could be just about anywhere there is arable land. In this case it is in Manila where, as in many countries, we find the rise of mixed land uses, the enclosure of formerly public land for private uses, and the conversion of agricultural land for industrial, commercial and real estate purposes. Although arable land is rare and valuable (only about 4% of the earth’s surface) this is a familiar pattern – urban eats rural, and rural eats wilderness. The ambition to break this pattern is at the heart of the FCL Global programme. © University of the Philippines Population Institute, «Spaces in Transition: Mapping Manila’s Peri-Urban Fringe,» with the kind permission of Prof. Arnisson Ortega, Syracuse University.

Skjonsberg: Martin Luther King once said ‘…the arc of the moral universe is long but it bends towards justice.’ How does this relate to the ambitions of the FCL Global programme?

Menz: The ETH Zurich has an engineering tradition allied with a humanistic background. One of the main differences between our programme and others is that we attempt to operate holistically from the orientation of science, design, engineering, and governance – bringing four streams of thought together in one plain. Working in Addis Ababa, we had the idea that Switzerland – as a neutral country where the headwaters of five major European rivers are located – could help with negotiating fair water use there, where the headwaters of the Nile are located.

Skjonsberg: If we take a watershed view of river systems, we see headwaters, flood plains, and deltas. You can read the anatomy of every river in this way, and as you say the functioning of the river requires that each of those parts are working together – or you get degrading systems.

Menz: And the human body functions in the same way – the heart as headwaters, the plains and wetlands of all your organs, and the hands and feet as deltas. We usually overcomplicate things when we talk about river systems. A river system is not so hard to understand at the beginning, but complications start when people, countries, and politics are involved.

Skjonsberg: When fragmentation of the system occurs.

Menz: Exactly, this is my point – I feel this in architecture a lot, it has to do with the formation of young people to become architects. It has to do with this specialization drama we have nowadays, because industry always says ‘we need specialists’. And we may forget that we need people who have the whole system, the entity, in mind. I think we have to be very careful about this – not to lose this humanistic view. The global view. We have to keep this in mind with FCL Global, to be very careful that we are not producing specialists who become technical enablers of unjust ambitions. Technical enablers deal with the quantitative – easy to sell and easy to explain politically. FCL Global intends to combine qualitative and quantitative challenges, big and small scales, general and specialized views involving many research disciplines, traditions, and interests, together with social needs.

Skjonsberg: Ivan Illich said ‘participatory democracy requires low energy technology’ and that ‘the road to the good society will be travelled at the speed of the bicycle.’

Menz: I understand what you mean. Mechanized mobility started with the invention of the wheel and gave us a big step forward. Saying this, our work addresses social equity through cultural values, and ecological equity through intact natural systems – both working top-down and bottom-up.

Prof. Sacha Menz is the Director of Future Cities Laboratory Global (Zurich Hub), has been Full Professor for Architecture and Building Process at ETH Zurich since 2004, and is a founding Member of the Institute of Technology in Architecture (ITA) at ETH Zurich. From 2011-15 he was Dean and Vice-Dean at the Department of Architecture, ETH Zurich. Since 2010 he is involved at the Future Cities Lab in Singapore, and is Co-Principal Investigator of the Dense and Green Building Typologies research project at FCL since 2015. He is a member of various industry boards and commissions, including the Reviewing Board for Clusters of Excellence, DFG (German Research Foundation) since 2017, and the Strategy Commission of ETH Zurich since 2018. From 2005-11 he was President of the SIA (Swiss Engineers and Architects Association), Zurich, from 2016-19 Member of the Board of Directors of SIA Switzerland, and is a member of the FSA (Federation of Swiss Architects) since 2004. In 1991 he founded Joran Sport Co. for the production and construction of bicycles in Zurich and Taiwan. In 1997 he co-founded together with Dolf Schnebli and Tobias Ammann the architectural firm sam architects and partners inc. where he is a principal architect.

Dr. Matthew Skjonsberg is Associate Director of Future Cities Laboratory Global (Zurich Hub), and is a lecturer on New Civic Landscapes and Public Health at the Department of Architecture’s new Master of Science in Landscape Architecture programme. Before joining FCL Global he was Coordinator of the Institute of Landscape and Urban Studies Doctoral Programme ‘Research Methods in Landscape and Civic Design’ at ETH Zurich. He obtained his doctorate with the dissertation ‘A New Look at Civic Design: Park Systems in America’ (2018) at the Swiss Federal Institute of Technology in Lausanne (EPFL), where he was a founding member of the Laboratory of Urbanism (EPFL-LAB-U) and Habitat Research Center (EPFL-HRC). He founded collab architecture in 2001, and from 2007-12 was a project leader at West 8 in New York and Rotterdam. He was recently a guest curator at the Museum of Modern Art in New York for the exhibition Frank Lloyd Wright: Unpacking the Archives (2017), and was a contributing researcher to Towards an Open City: The Quito Papers and the New Urban Agenda (2017) for the United Nations-Habitat III. He is currently preparing the book and exhibition Living Cities: Three Centuries of Park Systems (Park Books, 2021).