Pathways of Post-Socialist Urban Development. The Case of Budapest 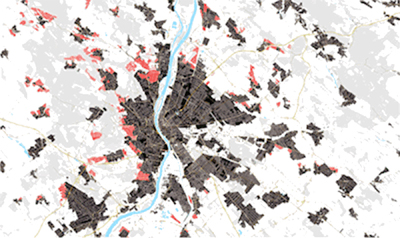 The subject of this dissertation is the specific symptom-group of Budapest’s post-socialist urban development, planning and governance between 1990 and 2010. Furthermore, it establishes causal nexus between these symptomps and their historical background, namely the charactristics of the socialist past and of the systemic transformation.

Post-socialist transformation is a widespread phenomenon with numerous variations. Even if the study is restricted to Eastern European countries, their recent developments vary depending on their distinct socio-economic contexts, historic path dependencies, and so forth. The first generation of studies from the 1990s and 2000s tried to offer generalized accounts, but their success was limited, as a result of insufficient in-depth material to work with. The lesson seems to be that comparative work should be preceded by the establishment of a pool of thorough single case studies, based on which the comparison and synthesis can then be conducted. This is why I have decided pursuing the single case study of recent developments in my home town, Budapest.

Since 1989, Budapest has been undergoing a process of transformation comparable only to those around the turn of the 19th and 20th centuries and after the Second World War, in the 1950s. Whereas the first story was closely linked to a general trend towards urbanization, driven by the rise of industrial societies over Europe, and encouraged by the state, while the second was marked by an ideological blueprint forced on the country by a socialist great power, the recent developments have been generated by market forces and private demand.

The Pattern of Seemingly Disjointed and Unsystematic Micro-Phenomena

Production of space of the past 25 years generated rather particular symptoms, such as the near absence of large-scale projects of cultural and symbolic significance initiated and carried out by the public hand or the fact that urban development was mostly characterized by business-dominated development projects not integrated into any grand urban design. Beyond these conspicuous symptoms, everyday experience offers a large number of seemingly disjointed and unsystematic micro-phenomena. The starting point of this research is the observation that these phenomena come together, and form a pattern. The hypothesis is that their coexistence is not random but has to do with systematic background factors that can describe both interrelations between the different phenomena and the nexus between historical legacies, characteristics of the systemic transformation in 1989-1990, and the production of space following it. This hypothesis leads to the construction of a model in the form of three explanatory blocks. Each of these blocks establishes links between particular historical background conditions and the syndrome of Budapest’s recent urbanization. This abstract model demonstrates that the different micro-phenomena point towards convergent outcomes that can be described as urban development generated by market forces and private demand and lacking coherent visions on how the city should evolve. More

Daniel Kiss (M.Arch. Harvard GSD) is senior assistant and lecturer at the Chair for Architecture and Urban Design, ETH Zurich, where he has been teaching urban design studios and theory seminars since 2009. He conceptualized the reading seminar series «Texts for Urban Design» and currently teaches this course. Daniel is writing a PhD dissertation on the post-socialist urban development of Budapest, supported by a grant from the Swiss National Science Foundation and, since 2012, also leads the research platform Urban Breeding Grounds. Prior to joining the Chair, he had worked as project architect with «Herzog & de Meuron» in Basel, Switzerland (2006-2008) and is founding partner of the Basel-based architecture practice XM Architekten GmbH.