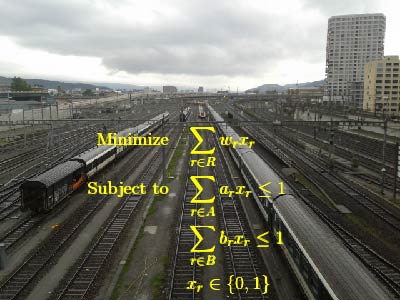 The reduction of buffer times in Swiss timetables enables the scheduling of more trains to face the recent demand growth for freight and passenger transport. The drawback is a loss of resilience of the railway network, in particular in main station areas. New approaches based on Operations Research have been developed to exploit the huge amount of routing possibilities in these areas in order to help resolve conflicts in case of disturbances.

Resilience of railway networks is given by two factors: buffer times added to running and dwelling times and the prompt intervention of traffic managers in case of disturbances. In order to satisfy the freight and passenger transportation demand growth of the last decades, new train services were scheduled using reduced buffer times. These new, more dense, timetables helped limit the need for new infrastructure whose construction and maintenance would have caused substantial economic and environmental costs. However, in order to ensure high service quality, it has become necessary to support traffic management with new approaches able to compensate the effects of increased sensitivity to small perturbations. The Institute for Transport Planning and Systems (IVT) is currently studying these approaches with the aim to develop a tool that can be used to support traffic management during railway operations.

In main station areas, traffic managers usually have a limited length of time for intervening before a small delay of a single train affects many other trains. The huge amount of switches in these areas provides many routes to and from all platforms. On the other hand, only limited retiming slots are available due to the tight schedules. Therefore rerouting plays a key role in conflict resolution. However the limited time available forces traffic managers to only take a small number of alternative routes into account. In recent years, several researchers have developed methodologies based on Operations Research allowing more routes to be considered.

These new methods enable the optimization of route choice not only for the delayed train, but for all trains in the considered area. This is done by labelling the possible routes of each train with a binary variable and expressing the safety and operational constraints of railway operations as linear inequalities involving those variables. Interestingly, the impact of disturbances on customers can be quantified using a linear composition of the same variables. The resulting metric has to be minimized and this yields to an optimization problem similar to the one shown in the picture. If this is solved, it gives the measure which minimizes the negative effects of a disturbance.

Unfortunately finding the exact solution exceeds the available time. Several heuristic algorithms provide solutions, but not optimal ones. At IVT ongoing research aims to develop a methodology which provides sufficiently good results in a reasonable amount of time. The goal is to implement a tool that helps traffic managers to make fast routing decisions which in turn improves the quality of daily railway service.