As part of the design studio «Atomic Heart River», students in collaboration with the Paul Scherrer Institute (PSI) were asked to develop visionary concepts for the science campus of the future. In addition to point clouds, other design tools such as a GNSS drawing device and virtual reality applications were used to strengthen the site-specific qualities of the student’s designs.

Translating the essence of a place into a design was the focus of the design course «Atomic Heart River» this year. The Paul Scherrer Institute (PSI) had asked Prof. Christophe Girot’s chair for support in developing a future-oriented vision for their campus near Villigen in the canton of Aargau.

The PSI is the largest natural science research institute in Switzerland and is located in a rural setting on both sides of the Aare River at the last foothills of the Tafeljura Mountains. Over the past decades, the PSI has developed very functionally around its large-scale research facilities, without paying particular attention to open space design or its relationship to the river. The core task of the design studio was therefore to reinforce the relationship of the research facility to the river and to propose an identity-creating redesign of the open space so that PSI can meet the requirements of a leading research institute of the 21st century.

As a basis for the design, a high-resolution point cloud model of PSI was created over several weeks in collaboration with PSI’s real estate department using drones and terrestrial laser scanners. The point cloud model was to be used experimentally this semester in conjunction with tools developed at NCCR Digital Fabrication: The first tool used during the students’ visit to PSI was a digital drawing stick. Based on historical tools for on-site landscape design, this tool locates the user in the field to within a few centimeters using differential GNSS. Additionally, it allows the user to enter individual points or polylines at each position. Thus, students could trace paths in the field that are not recorded in existing map material or document spatial qualities that they found spontaneously.

Both the point cloud model and the drawing device inputs are organized in the same coordinate system and can thus be used together smoothly. Thus, back at ETH Zürich, the students were able to verify their inputs collected in the field via a virtual reality (VR) application in the point cloud model. However, with the VR application developed specifically for the semester, it was not only possible to check the inputs. It was also possible to apply changes, add new lines and points, and even test three-dimensional design inputs. The analytical functions of the application allowed for checks of distances, slopes, relative and absolute heights, among other things. In an iterative process of classical design with sketches and models, 3D modeling, and verification and adaptation in the VR application, students thus created highly accurate designs tailored to the site. To ensure high site specificity, the directive was to design as much as possible on site. Either during the actual site visit to PSI or in the virtual model. Ultimately, the results should express PSI’s identity and self-image and serve as inspiration for planning over the next decades.

The results of the spring semester «Atomic Heart River» will be exhibited at the PSI Open House in Villigen on 23 October from 10:00 to 17:00.

Benedikt Kowalewski is a doctoral researcher at the NCCR Digital Fabrication on new design techniques that will reduce the barrier between intuitive design and technical execution and pave the way for robotic landscape fabrication. At the centre of this research is the automated walking excavator HEAP. 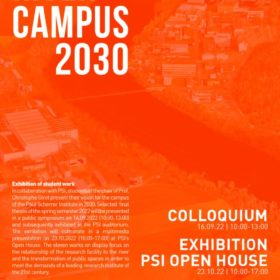