When the Dog is Dead, Throw it in the River – Mapping and the Challenges of the Ciliwung 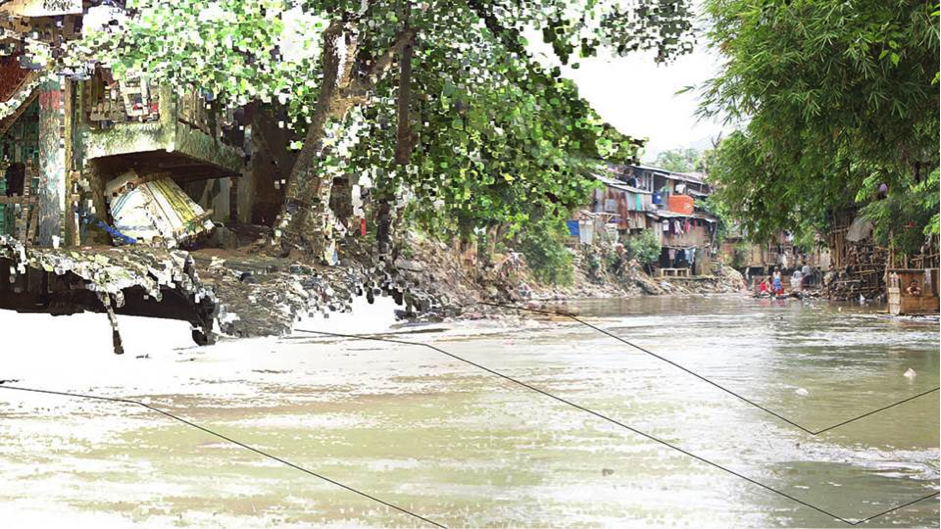 Urban rivers facing pressure from rapid urbanisation often take on multiple roles beyond their natural ecological function. The Ciliwung River flows through the megacity of Jakarta and is located in West Java, Indonesia. Along with many rivers in Southeast Asia it has become an environmental buffer to Jakarta’s poorly managed waste. A popular Javanese jingle from the 1990’s includes the phrase: «…when the dog is dead, throw it in the river», and serves to illustrate some of the complex cultural factors behind the long-compromised role of Indonesia’s rivers.

The Future Cities Laboratory’s (FCL) Landscape Ecology team has been researching the Ciliwung River since 2011. The cumulative research efforts within this challenging context often required the use of unconventional methods to obtain what is generally considered base knowledge. A variety of simulations and design scenarios have been produced as a result of the work.

In October 2013 four members of the FCL’s Landscape Ecology team travelled the Ciliwung River by boat. The objective of the journey was to ground-truth bathymetric information along the river against official measurements which were provided by local ministries. This field checking was essential to constructing a digital model of the river, and required documenting its physical attributes including the depth and width of key cross-sections using spatially referenced measurements.

A series of collaborations with community groups were essential to the success of the expedition, as they provided necessary local knowledge and were more resilient to unexpected events that befell the team. For example, a garbage blockage meant that the boat itself needed to be lifted out of the river and carried some 50-meters overland before the expedition could continue. Meanwhile, an initial attempt to measure the depths of the river was thwarted by the strength of the current, which destroyed some equipment and meant that the measurement tools also had to adapt.

This anecdotal attempt to map the Ciliwung River provided a foundational understanding and context to the physical attributes of the site. The information sourced during the mapping exercise has since been valuable in the material investigation of specific site elements. Thus these new methods of mapping, a result of the collaboration between locals and researchers, have been  essential in furthering the team’s work on the Ciliwung River.

The work was presented in a conference and exhibition in Jakarta, in November 2014, and was recently exhibited at Singapore’s Urban Redevelopment Authority in ‘Future Cities: Research in Action’, from January to March 2015. It is also scheduled to be included in the Shenzhen Biennale at the end of the year. The research of the Landscape Ecology team will be compiled in a series of journal articles and published as a Special Issue in the journal of Sustainable Cities and Society titled ‘Rehabilitating urban rivers: merging science with design’.